placing concrete on a composite deck

Is placing concrete on the ground different from composite deck?

Answer:
To an iron worker or those that work mostly in commercial construction, the term composite deck or composite concrete deck refers to concrete placed on metal deck similar to detail 24 below. This is very common in steel construction, which is rare in residential home construction.

The composite behavior of detail 24, according to ACI (American Concrete Institute), is normally developed in the use of the shear studs also known as Nelson studs that are welded to the top of the steel beam. These Nelson studs physically connect the concrete to the beam giving it much strength to carry any load placed on the surface.

To residential constructors, composite decks refer to exterior decking material made from wood and plastic fibers mainly to construct deck and railing. 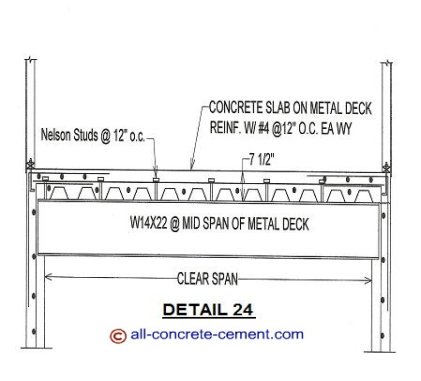 If you place concrete on metal deck such as shown on detail 24 without concrete pump, you need to make sure to not overload the deck. It is common practice if you pour directly from the cement truck to dump the concrete on one side and then use rake or shovels to spread the concrete to the other side of the pour that the truck can't reach. When dealing with metal deck this is dangerous because unbalance loading of the metal deck can cause the deck to buckle resulting in deck failure.

Other than the risk of unbalance loading the floor deck, you can pour the metal deck floor pretty much the same way as you would concrete on the ground.