What is the purpose of footing keyway? Any tip on how to install them?

Answer
The idea behind footing keyway is to aide the steel reinforcements in resisting the lateral pressure exerted on the base of the foundation walls. The cold joints between the footings and foundation walls are viewed by structural engineers as weak points. The detail below show the keyway on top of concrete footing. 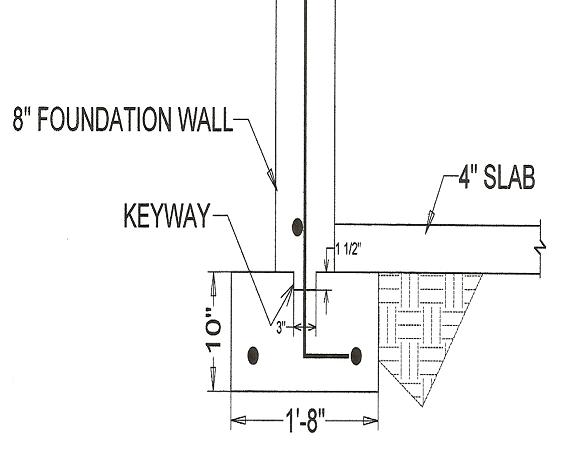 By creating notch on the footings such that the new concrete for the foundation walls protrude into the footing interlocking the two elements. Rather than relying on the rebars and the bonding between foundation wall and footing, we have concrete resist the lateral pressure.

It is extremely rare to see keyway shown on home or residential detailing. Even if it is shown, no one pay attention to them or install them.

As shown on the detail most keyways are about 3 inches wide by 1.5 inches deep, the size of 2x4. The ideal way to install keyways is to place them centered on the reinforcements which can be difficult to install because you have to drill holes on the 2x4 to allow the dowls thru.

To avoid drilling the holes, some tie the dowls to the side of the 2x4 which are supported by the cross bracing of the footing forms.

Here is an easier way, and that's how I personally do it. After the footing is leveled, just before the concrete start setting, I scoop up the concrete enough for the desired keyway. Depending on the concrete testing company or engineer of record in your project, they may not allow you to do this.

Some structural engineering consultants, rather than requiring a key way they specify that the surface of he concrete be roughened. In that case I would use a #4 bar, after the footing is leveled, drag it from dowl to dowl creating the rough finish necessary.

When bidding a job that show keyways, make sure to put some money for labor and material, otherwise always exclude it from your bid.